Germany defeated the Polish forces within a short period of time with its blitzkrieg tactics. The war was already practically over when the Soviet Union invaded Poland from its own territory on 17 September. Germany and the Soviet Union amended their agreed spheres of influence with an agreement they signed on 28 September. The Polish government-in-exile began its operations in France at the end of September. It headed the Polish Army, which was for the most part formed of refugees. Polish ships operated in connection with the Royal Navy, while Polish flying detachments operated in connection with the Royal Air Force.

The German invasion of Poland progressed quickly. The Luftwaffe efficiently supported the tanks and the motorised infantry that were advancing at the front. These fast-moving forces advanced deep without regard to their flanks. The Polish Army was already effectively defeated after two weeks of fighting. The Polish forces deployed in the west were surrounded by 17 September.

The Red Army’s forces crossed the Polish border on 17 September. They advanced quickly and reached Brest-Litovsk, which had already been occupied by German forces, on 18 September. Prior to the start of the invasion, People’s Commissar for Foreign Affairs V. Molotov stated the reasons for the Soviet Union’s actions in a note that was sent to the Polish ambassador to Moscow.

According to the note, the Republic of Poland and its government had in effect ceased to exist. Therefore, the agreements signed between the Soviet Union and Poland were no longer in effect. The Soviet Union could no longer remain neutral to the events taking place in Poland. Neither could the Soviet government remain indifferent to the Ukrainians and Belorussians living in Polish territory being left to their own resources and without protection. In the prevailing situation, the Soviet government had ordered the top brass of the Red Army to command the covering forces to cross the border in order to protect the lives and property of the Ukrainian and Belorussian population.

The United Kingdom and France deemed that the guarantees they had made to Poland in March did not apply to an attack by the Soviet Union, as it was not a European state. Neither Western power declared war on the Soviet Union, nor did they break off diplomatic relations with it. The objective of the Western powers was to avoid going to war against the Soviet Union in addition to Germany.

The Red Army effectively conquered the part of Poland that belonged to it according to the spheres of influence that had been agreed upon in Moscow on 23 August 1939. The spheres of influence defined in the secret protocol to the non-aggression pact were amended in Moscow on 28 September. Lithuania was moved to the Soviet Union’s sphere of interest, and the division of Poland was specified.

Germany’s victory, which had been achieved quickly and seemingly easily, was not without its losses. Over 13 000 Germans were either killed in action, died of their wounds or were declared permanently missing in action. More than 30 000 were wounded. According to some estimates, approximately 70 000 Polish people were killed during the fighting in September, while approximately 130 000 were wounded and more than 300 000 were captured. The Germans started the persecution of Jews in the conquered areas on 27 September.

The estimates of the number of Polish people who were transferred to prison camps in the Soviet Union from the area conquered by the Red Army vary greatly, with the lowest estimates being approximately 100 000. 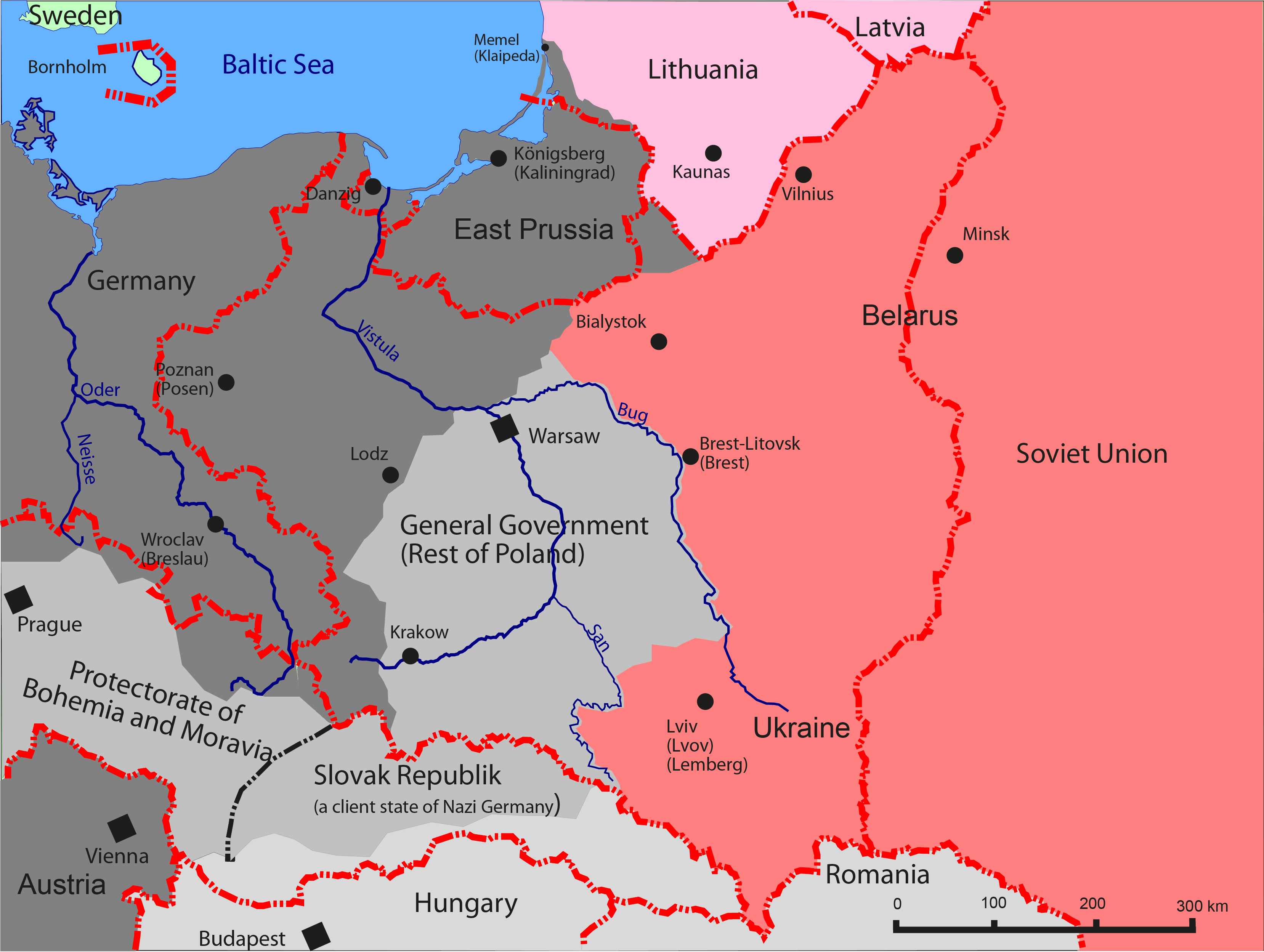 Poland was divided for the fourth time in its history. The Soviet Union annexed the areas it had conquered, dividing most of them between the Ukrainian Soviet Socialist Republic and the Byelorussian Soviet Socialist Republic. The area of Vilnius was given to Lithuania. Germany annexed the westernmost areas of Poland and placed the rest of the territories under the administration of the General Government.

The Polish government-in-exile started its operations in Paris

The Polish government-in-exile, led by General Władysław Sikorski, began its operations in France at the end of September. The soldiers who had managed to escape Poland via Romania had also relocated there. The government initially had a Polish army with a strength of approximately 40,000 men at its disposal, and this strength more than doubled by the beginning of 1940. In France, the government relocated from Paris to Angers.

Germany’s successful invasion of France in May 1940 led to the Polish government and the Polish troops that had fought in France to relocate to England. The government-in-exile established itself in London.

The Polish forces increased in number during the war. The largest addition came from a Polish army established in the Soviet Union. It was deployed to lead the Allied forces in the Middle East.

The Polish forces fought at the different Allied fronts until the end of the Second World War. The units of the Polish Navy that had survived the war with Germany operated in England in cooperation with the Royal Navy.