Germany and the two countries that had declared war on it on 3 September, the United Kingdom and France, launched naval operations against each other on the very day that war was declared. The main responsibility for the naval blockade of Germany fell to the United Kingdom, whose naval forces were responsible for the Atlantic Ocean. The German Navy (Kriegsmarine) was outnumbered. It could not deny the United Kingdom’s command of the oceans. However, the Royal Navy was unable to operate on the Baltic Sea.

Both parties sought to weaken each other with a naval blockade

A naval blockade was included in the war plans of Germany as well as the United Kingdom and France from the Allied side. Germany’s primary aim was to cut off the United Kingdom’s maritime transport. The Royal Navy’s superiority in numbers guaranteed that it had command of the sea. The Kriegsmarine had to avoid a decisive battle against the British fleet. Because of this, the war plans assigned the main responsibility for the naval blockade to submarines, similarly to the First World War.

The Allies already had experience in imposing a naval blockade on Germany from the First World War.

Similarly to the previous time, their naval blockade targeted all ships that were transporting goods to Germany, including ships of neutral countries. In contrast, the transport of goods from Germany to other countries was in principle allowed at first. The Allies particularly sought to prevent Germany from importing products that were vital to the German war industry.

Sweden’s iron ore shipments to Germany were protected during the open water season, as they were transported via the Baltic Sea, which Germany controlled. After the Gulf of Bothnia froze over, the ore had to be first transported to Narvik by rail and from there by sea to Germany. The ships were able to travel most of their journey in Norway’s territorial waters. The Allies wanted to lay mines along a part of the coast of Norway to force the cargo ships to international waters.

Division of responsibilities between the Western Allies

Although it was not yet certain in August that a war would break out between Germany and the Western powers, all the parties to the war prepared for the start of a naval war well in advance. The United Kingdom and France divided the areas of responsibility for naval warfare so that the former had the main responsibility for naval warfare on both the Atlantic Ocean, particularly the North Sea, and on the Middle Eastern coast of the Mediterranean Sea. The French were primarily responsible for the rest of the Mediterranean Sea.

The British Empire, which was dependent on maritime transport, had the largest naval fleet in the world and was used to operating on all oceans. In 1939, before the start of the war, the United Kingdom sent people to all the key ports around the world in preparation for a possible naval blockade. The people in question prepared to direct maritime traffic and inspect merchant ships. Inspections of merchant ships travelling to England or France started as early as 23 August.

In August, the Kriegsmarine sent surface vessel fleets and submarines out to the oceans, ready to start their operations immediately should a war break out. The new, modern, smaller than usual battleships Admiral Graf Spee and Deutschland, as well as their support vessels, departed Germany between 21 and 24 August. All the large submarines relocated to their initial wartime operating areas starting 19 August, with the last submarines relocating on 31 August.

According to some records, 39 of the submarines, i.e. practically all the submarines that were capable of operating in oceans, were in position when the war started on 3 September. Germany had a total of 57 submarines. As the war dragged on, 15–20 submarines were always operating on the oceans at any one time.

The German submarine U-30 sank the British passenger liner SS Athenia on 3 September, while the ship was travelling from Glasgow to Montreal. The ship carried over 1,100 passengers and a crew of over 300. The ships that rushed to Athenia’s aid were able to rescue the majority of the passengers and crew. Almost 100 passengers and a little under 20 crew members died in the torpedo attack or drowned.

The sinking of the passenger ship violated an international agreement

The sinking of the passenger ship violated the Second London Naval Treaty, signed in 1936. According to the treaty, when operating against merchant vessels in wartime, warships, including submarines, were required to make sure that any crew and passengers escaped safely before sinking the vessel.

According to an order issued to submarines by the Kriegsmarine, they were not allowed to attack passenger ships. The captain of the submarine later attributed the incident to poor visibility and the ship’s zigzag course. He claimed to have believed the ship to be an armed merchant vessel or a troop transport ship.

The personnel who had been sent to the key ports in August expedited the launching of convoy operations in maritime transport. The Allies had gained good experiences of the protection provided by convoys against submarines during the First World War. The Germans succeeded in sinking several ships travelling alone in the first months of the large-scale war.

The United Kingdom was able to safeguard the transport of troops

The United Kingdom was in control of the English Channel. The Royal Navy was able to organise and safeguard the transport of troops by sea, first to France and then from France to England. Between September 1939 and June 1940, half a million men and approximately 89,000 vehicles were transported across the channel.

Important troop shipments from the countries of the British Empire to the theatres of war in Europe and the Middle East were successful under the protection of the Royal Navy. The first Canadian division was transported to Europe at the end of 1939.

A submarine attack on a British naval base

The main base of the Royal Navy was located at Scapa Flow, an area north of Scotland that was sheltered by the continent and the Orkney Islands. The German submarine U-47 snuck into the base area on 14 October 1939 and sank a British First World War-era battleship called HMS Royal Oak with its torpedoes. Afterwards, the submarine exited the area.

The Germans began launching air strikes on British naval convoys in October. In December, the Germans sank 30 smaller vessels with air strikes. The cooperation between the Royal Air Force and the Royal Navy was only just beginning. The first successful joint operation by British surface vessels and aircraft against a German vessel occurred on 30 January 1940. The target was the submarine U-55, which was successfully sunk in the joint operation.

Magnetic sea mines were a nuisance to the Allies

In October, the Germans started using magnetic sea mines dropped from the air on maritime routes. It took a while for the British to develop the equipment and methods needed to eliminate them.

The United States of America declared itself to be neutral in the new large-scale European war. However, its sympathies lay with the Allies from the beginning. On 21 September, the United States Congress rejected a cash and carry bill, which would have enabled the sale of supplies to belligerent countries. It required payment in cash and for the supplies to be transported by the purchasing country’s own ships. President Franklin D. Roosevelt submitted the bill to the Congress again in October, when it was passed by both chambers. The law came into effect with the president’s signature on 5 November.

In the ensuing battle, the German vessel suffered heavy enough losses that its commander, Captain Hans Langsdorff, considered it to be best to head for the port of Montevideo, the capital of Uruguay, for repairs. Harwood’s squadron, which had also taken damage, stayed within international waters to await the German ship.

The Uruguayan authorities refused the request of the German vessel’s captain for a prolonged stay under the Hague Convention of 1907. The captain received instructions from Germany to scuttle his ship, which he did upon departing Montevideo on 17 December. Langsdorff shot himself three days later. 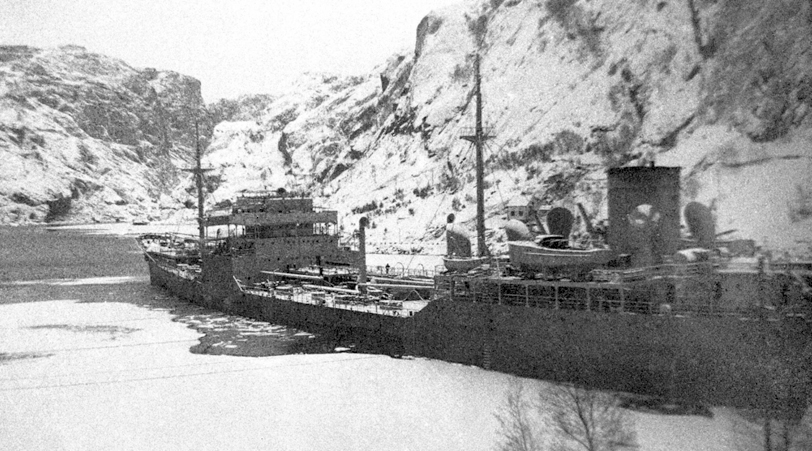 The German vessel Altmark lying aground in a fjord in Norway on 24 February 1940. The Royal Navy had released the 300 prisoners of war on board the ship on 16 February 1940. Image: Popperfoto/Getty Images.

The crews of ships that had been destroyed by the battleship Admiral Graf Spee had been taken prisoner and transferred to a tanker that served as a support ship. The tanker was called Altmark. The vessel had departed on a journey home with the prisoners on board before the naval battle that took place off the coast of Uruguay. On 14 February, while travelling in Norwegian territorial waters, the vessel was spotted by a naval unit comprising British escort ships.

Despite the opposition of the Norwegians, the escort ship HMS Cossack arrived in Norwegian waters and cornered Altmark in a fjord called Jøssingfjord on 16 February. The British marines boarded the ship and freed the imprisoned British sailors, who numbered over 300.