The army focused on developing the forest warfare skills of the troops in the latter half of the 1930s. The areas of study included weapon fire in a forest, the movement of units of different sizes in a forest and an offensive by an infantry regiment in a forest. The army corps, i.e. the ground forces, also initiated the preparation of instructions on forest warfare. However, they were not published in printed form before the Winter War.

Following the Swedish example, the General Staff ordered for trials on the fire effect of different weapons in forest conditions to be launched in 1934. Prepared for a rifle company, the trial programme included experimental study of the effect of weapon fire. Another aim of the trials was to determine the effect of defensive and offensive fire in a forest.

The studies included determining the effect of mortars and direct fire on covered machine gun nests. Separate studies were also carried out on transporting a light machine gun, moving into a firing position and determining the effect of weapon fire in a forest. The trial programme included 43 different trials. Including the preparation time, two weeks were reserved for conducting them.

Studying the movement of troops in a forest

In the 1935 Training Order, the commander of the Finnish Army ordered the army corps, i.e. the peacetime army, to focus ‘on systematic, large-scale training in advancing in a forested terrain’. The army corps was also tasked with holding a trial exercise in the summer in advancing through a forest with roughly a regiment-sized unit. The key aims of the exercise were determining the measures required to maintain direction, methods of staying in contact, each unit’s combat range as well as the most appropriate forms of advancing in a forest. The trial operations in 1935 were modest in scale.

In the 1936 Training Order, the commander of the Finnish Army ordered the army corps to determine:

1. ‘What measures are required to maintain direction and contact?

2. The most appropriate forms of each unit, though they may, of course, vary based on the situation.

3. The width and depth of each unit’s combat range in a forest.

4. How a systematic advance must otherwise be arranged for different units with regard to the quality of distances and targets.

5. The time required to form different formations a) if the advance proceeds without enemy disturbance and b) if the advance is disturbed by private patrols of the enemy.’

Offensive combat in a forest as an object of study

According to the 1937 Training Order, the army corps was to continue the trials on the movement of a wartime infantry regiment, battalion and company in a forest. The army corps also had to determine the capability of a regiment for offensive combat in a forest. The premise for these trials was a situation in which a relatively strong enemy temporarily grouped into a defence formation in the event of an encounter.

The 1937 Training Order also ordered the army corps to try building roads in a forest that is difficult to travel. The purpose of the trials was to determine the capabilities for providing logistical support to troops advancing through a forest. The trials especially had to determine the time required for constructing the roads. The General Staff required the trials to be conducted with both engineer troops and infantry.

Good experiences in moving troops through a forest

Two units under the Cavalry Brigade tried advancing through a forest in summer 1937: the Tavastia Cavalry Regiment with the whole regiment and the 1st Jaeger Battalion with the whole battalion and a company. The cavalry dismounted before starting the advance. Even with little training, the troops were successful in their advance through a forest. Major General G. F. Palmroth, the commander of the Cavalry Brigade, was satisfied with the experiences gained from the trials.

Forest warfare trials were conducted in both summer and winter

The 3rd Division had already studied the effects of a forest on marching in summer 1936. The trials were continued the following year in both winter and summer. The division’s commander, Major General J. Heiskanen, stated in his account that they had to advance in a straight line through the forest to best avoid the risk of the troops crossing each other.

Based on his units’ trials, Heiskanen defined principles for an offensive in a forest. Reconnaissance had to be carried out in the offensive zone well enough in advance. The troops could not group into the battle formation required for an offensive too early, particularly in the winter. When advancing in a wide formation, too many men have to participate in the strenuous task of making a path.

Forests made it difficult to use artillery 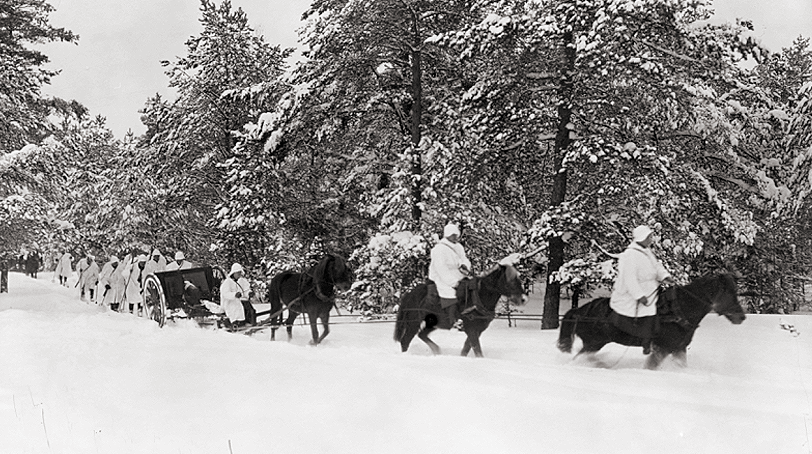 According to Heiskanen, it was difficult to use artillery to provide immediate support for an offensive by the infantry. During an offensive in a forest, the infantry advanced too close to the enemy before charging. The unit’s own preparatory fire partly overlapped the charge. In

Heiskanen’s opinion, a better way to provide immediate support was to use mortars, which could be fired closer to the unit’s own troops. Artillery had to be used against the enemy’s reserves and artillery firing positions.

The use of machine guns became difficult in a forest

According to the division’s account, their own machine guns were unable to support the attacking riflemen by providing fire. Machine guns were better suited for covering the flanks. On the other hand, the forest provided cover for the advancing troops against the enemy’s machine gun fire.

In autumn 1937, Major General W. Hägglund, the commander of the 2nd Division, was dissatisfied with the trials conducted by his units. The trials conducted were too few in number, and the results gained from them were contradictory, so it was difficult to draw conclusions. In November, Hägglund provided his units with written instructions on continuing the forest warfare trials.

The army corps launched the preparation of instructions on forest warfare

In his own statement, Lieutenant General H. Öhquist, the commander of the army corps, stated that the Defence Forces had to begin preparing instructions on forest warfare based on the results gained from the trials. The results of the trials were to be sent to Captain T. V. Viljanen. The standing order on forest warfare was not published before the Winter War.

Viljanen published his study on the forest battles of the First World War in the Argonne Forest in 1938. In the preface to his book, Viljanen stated that one of the key peacetime missions of the army was to improve the troops’ forest warfare skills as much as possible. In his opinion, forest warfare had to be taken into account in the wartime compositions of troops. According to Viljanen, the best opportunities for a technically less well-equipped army to attack was in a forest.