The League of Nations expelled the Soviet Union

The mission of the new Finnish government, appointed on 1 December, was to re-establish peace. The road to negotiations with the Soviet Union was blocked. The Soviet Union would only negotiate with the Finnish People’s Government, which it established in Terijoki on 1 December. Sweden refused to participate in defending the Åland Islands. The Finnish government turned to the League of Nations, which expelled the Soviet Union on 14 December. Finland did not support this decision.

Parliament convened in the evening of 30 November

Parliament convened for an extraordinary session in the evening of 30 November. It was scheduled to start at 6pm. For safety reasons, the session was held at the Vallila Community Hall, rather than Parliament House. Changing the session’s location is likely one of the reasons why the starting time was postponed by two hours. The session started at 8pm with 163 members of Parliament present.

The prime minister, minister for foreign affairs and minister of defence presented the Finnish government’s report in the first closed plenary session of the evening. Parliament’s next plenary session started at 9:10pm the same evening. During this session, the government was given a vote of confidence from Parliament.

In a government meeting held after the parliamentary sessions, Prime Minister Cajander stated that the government’s operations had gotten to a point ‘from which another government would possibly be better equipped to move forwards, and it would therefore be appropriate to leave our seats for the president to fill’. Väinö Tanner, the minister of finance and chairman of the Social Democratic Party, supported the prime minister’s proposal.

The prime minister submitted the government’s resignation to President Kallio that night at the Krogius Villa in Kuusisaari, to where the president had relocated. The prime minister was accompanied by Minister of Agriculture Pekka Heikkinen from the Agrarian League and Minister without Portfolio Ernst von Born from the Swedish People’s Party of Finland.

Risto Ryti became prime minister of the new government, which was appointed on 1 December

Risto Ryti, the governor of the Bank of Finland, became the prime minister of the new government, which was appointed at 5pm on 1 December. Ryti, who was a member of the National Progressive Party, returned to politics reluctantly. He was pressured to take on the position, particularly by Foreign Minister Väinö Tanner of the outgoing government. The Finnish envoy to Stockholm, J. K. Paasikivi, entered the government as a minister without portfolio. He was a member of the National Coalition Party and had previously served as chairman of the party, in addition to holding other positions.

The United States made its mediation offer on 1 December. The Soviet Union rejected the offer, citing its good relationship with the Finnish People’s Government. The government in question was a government headed by Otto Ville Kuusinen that the Soviet Union had formed in Terijoki. The Soviet Union signed a treaty of mutual assistance and friendship with Kuusinen’s government in Moscow on 2 December. According to an announcement made by Moscow the same day, the Karelian people [the population of Soviet Karelia] would now join their kin in Finland and establish a joint nation state.

The first action taken by the new Finnish government had been to try and restart negotiations with the Soviet government. This was now impossible after the Soviet Union’s declaration that it only recognised Kuusinen’s government. 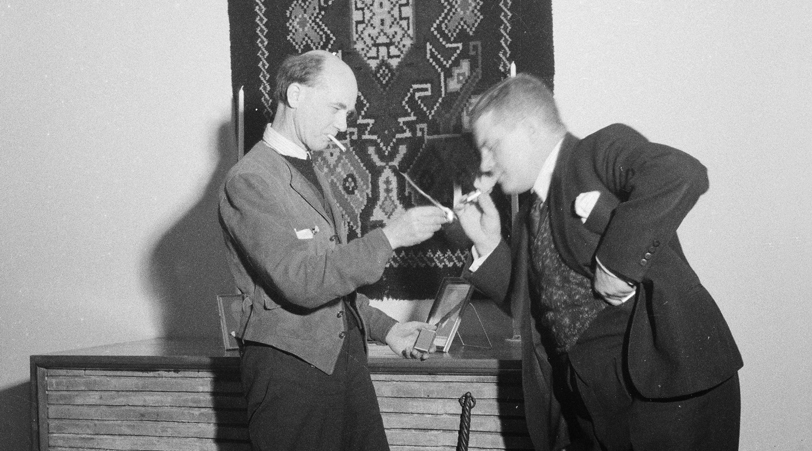 Swedish Minister for Foreign Affairs Rickard Sandler was forced to resign after the start of the Winter War because of his sympathies for Finland. During the war, his wife worked actively to evacuate Finnish children to Sweden. Sandler (on the left) visiting Kaarlo Hillilä, the governor of the Province of Lapland, in Rovaniemi on 1 October 1940. SA-kuva.

The Finnish government’s Foreign Affairs Committee decided to request for Sweden’s assistance in defending the Åland Islands. The two countries had signed an in-principle agreement regarding joint defence in Stockholm in January 1939. In order for the agreement to come into effect, the defence preparations for the Åland Islands had to first be approved by the League of Nations. The Soviet Union stopped the matter from being addressed in the League of Nations.

During the meeting, Tanner placed a call to Prime Minister Per Albin Hansson of Sweden, who was the chairman of the Swedish Social Democratic Party. Hansson rejected Tanner’s request. Sweden would not take part in a war between the Soviet Union and Finland. Swedish Foreign Minister Rickard Sandler, who was sympathetic to Finland’s situation, left his post on 3 December when the Swedish government changed. Sweden’s new, broader coalition government, headed by Hansson, appointed Christian Günther, the country’s envoy to Oslo, as the new minister for foreign affairs.

Swedish Prime Minister Hansson had already sent a letter to Tanner, who chaired the Social Democratic Party of Finland, during the negotiations in Moscow in answer to Tanner’s inquiry about Sweden’s stance on a war between the Soviet Union and Finland. Hansson made it clear that Sweden would not participate in such a war. Nevertheless, the Finns continued to hold on to the hope that Sweden would change its stance when things came to a head. Sweden’s stance did not change. It would not become a belligerent in the war by sending active troops to Finland. Sweden provided assistance and sent volunteers to Finland.

The Finnish government turned to the League of Nations

In a meeting on 2 December, the Finnish government decided to turn to the League of Nations. One of the reasons provided for this by Tanner and Paasikivi was that the League of Nations could act as a mediator between the Soviet Union and Finland or at least encourage other countries to assist Finland.

Rudolf Holsti, the Finnish envoy to Tallinn, and Minister Holma, the Finnish envoy to Paris, were chosen on 8 December as Finland’s representatives for the General Assembly of the League of Nations. Lieutenant Colonel Aladár Paasonen was also appointed to the delegation. Among other things, Holsti had served as the Finnish minister for foreign affairs before Erkko.

According to instructions provided by the Ministry for Foreign Affairs of Finland, the delegation had to comply with the Scandinavian stance. Accordingly, Finland would not support the expulsion of the Soviet Union from the League of Nations. However, the delegation was authorised by Foreign Minister Tanner to act at its own discretion in voting situations, ‘as bad connections made it difficult to send advice from home for voting situations’.

The League of Nations expelled the Soviet Union from the organisation on 14 December. The expulsion was supported by seven of the Council’s members, including France and the United Kingdom. Finland, which had recently been chosen to become a member of the Council, abstained from voting together with China, Greece and Yugoslavia.