Soon after the end of the Battle of Suomussalmi, Siilasvuo’s division (9th D) launched an offensive to destroy the Soviet 44th Rifle Division (44th RD), which had been established in Ukraine and was advancing along the Raate road. The Soviet division was divided into several encircled pockets, known as mottis, in the attack. The battles to destroy the mottis ended in the complete defeat of the enemy forces on 7 January.

Battle preparations during the Battle of Suomussalmi

While the Battle of Suomussalmi was still being fought, the 9th Division (9th D) began to prepare for an offensive to defeat the Soviet rifle division (44th RD) that had been stopped on the Raate road. The 65th Infantry Regiment, which was deployed in the area of Group Susi, was subordinated to the 9th Division after the recapture of Suomussalmi. The regiment arrived at the battle area on 4 January and joined the offensive launched by the division on the first day of January.

An enemy rifle division was defeated on the Raate road 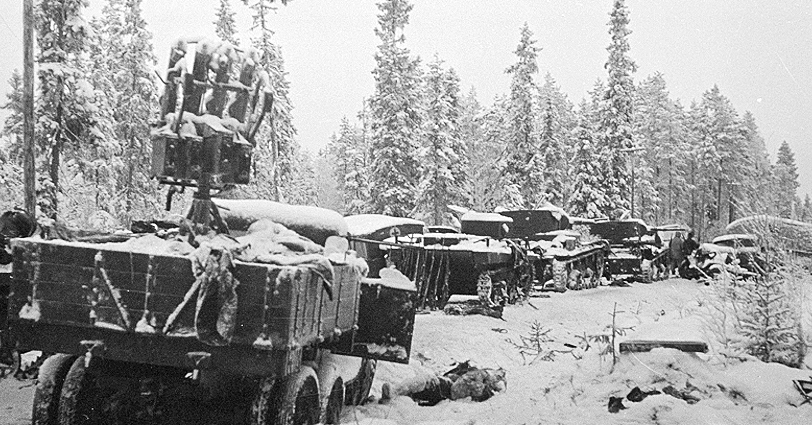 Equipment left behind by the Red Army’s 44th Rifle Division on the Raate road. SA-kuva.

The Finns attacked the vanguard of the Soviet division (44th RD) with two infantry regiments (27th IR and 65th IR) from the south and the north. Approximately five battalions were transported to the enemy division’s southern flank utilising the frozen waters of Lake Vuokkijärvi. Detachment Kari comprised two battalions (15th SepBn and IV/FRBtry) and a light detachment (22nd LDet). The detachment attacked on the Raate road via an intersecting road from the south. The 64th Infantry Regiment, commanded by Jaeger Officer, Lieutenant Colonel Uno Fagernäs, attacked towards Likoharju from the south with one battalion and towards Raatevaara, near the border, with one company (Co/64th IR).

After almost a week of combat, the Battle of Raate Road ended in a glorious victory for the Finns. The enemy rifle division (44th RD) was rendered completely combat ineffective. The majority of the rifle division’s heavy equipment was left on the Raate road as spoils of war for the Finns. Some of the division’s personnel managed to flee over the border by travelling through the forests. One of them was the commander of the rifle division, Brigade Commander Alexey I. Vinogradov. He was sentenced to death by the military court and executed by firing squad in front of his troops.

Stabilisation of the front

The Soviet forces (163rd RD) that escaped across Lake Kiantajärvi from Suomussalmi stopped Group Susi’s advance on the western bank of the Kelojoki River, near Juntusranta.

The Kuusamo area remained relatively peaceful throughout the Winter War. The Battle of Raate Road was followed by a period of trench warfare in the Juntusranta–Suomussalmi area. Siilasvuo’s division was relocated to the Kuhmo area. Some of the troops in the areas of Suomussalmi and Juntusranta were relocated to the fronts in Southern Finland, for example one infantry regiment (64th IR) to Ladoga Karelia.

Detachment Kari was formed under the North Finland Group in the Raate area. It took up defensive positions near the national border. Group Susi remained in charge of the front in the Juntusranta area under the North Finland Group. In February, Group Susi’s area of responsibility was extended to include the Kuusamo area, where Detachment Seppälä was deployed. It had to retreat behind the new national border after the end of the war.