The areas of Kuhmo and Lieksa 1939 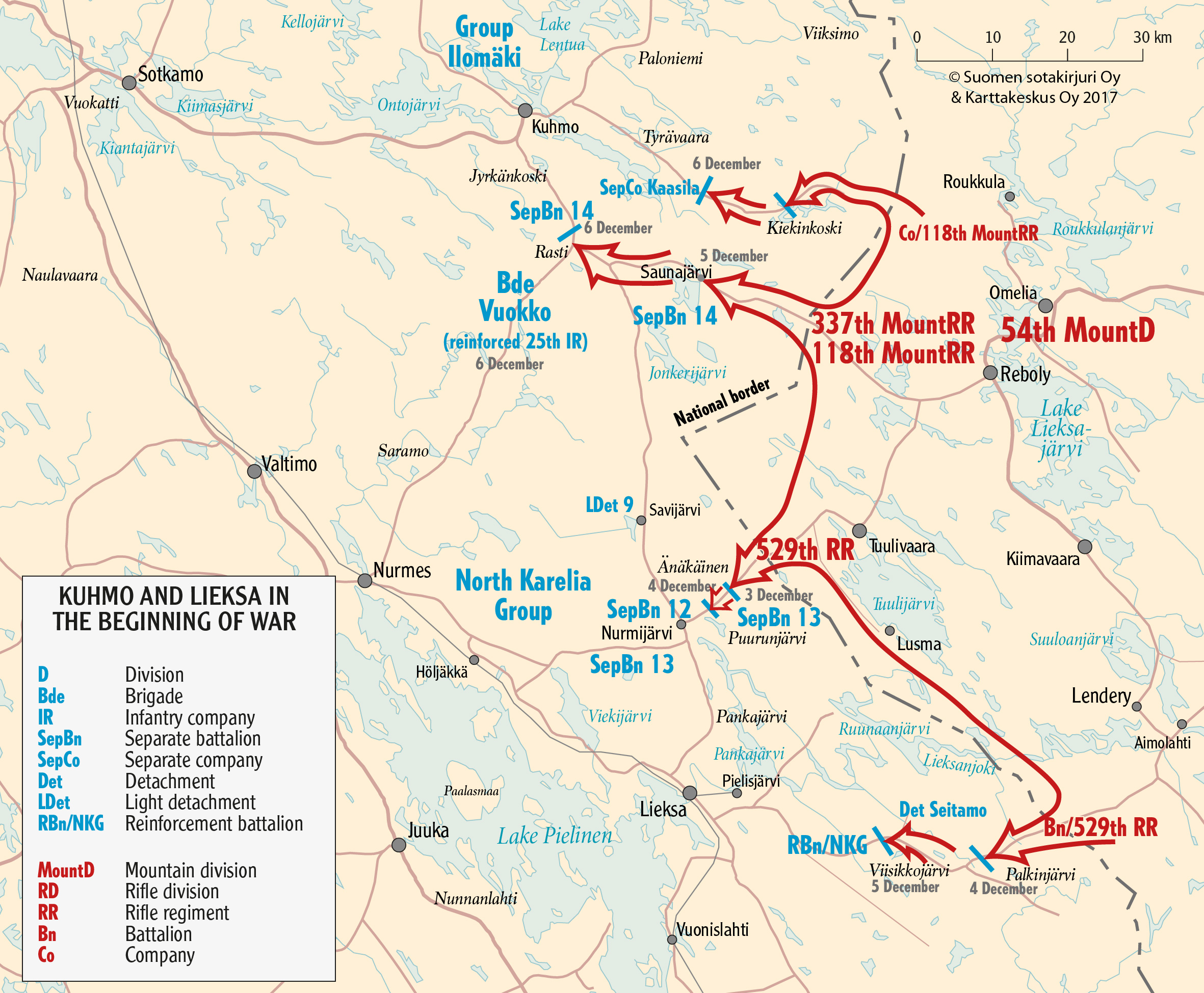 The mountain division (54th MountD) that was deployed at the southern flank of the Soviet 9th Army (9th A) launched its offensive along the Repola (Reboly)–Kuhmo road on 30 November with two mountain rifle regiments (118th MountRR and 337th MountRR). One company (Co/118th MountRR) attacked in the Kiekinkoski–Kuhmo area on the right.

The main offensive along the Repola (Reboly)–Kuhmo road by the mountain division (54th MountD) commanded by Brigade Commander Nikolay A. Gusevsky reached the Rasti crossroads on 6 December. The fighting on the Kiekinkoski road in the north reached Tyrävaara on 13 December.

The troops of the brigade, which was commanded by Jaeger Officer, Colonel Aksel Vuokko, had been detached from the 9th Division at the time. It was stationed as the commander-in-chief’s reserve in the Oulu area, where it had been established. The first units of the brigade arrived in the area south of the Rasti crossroads on 6 December. The light detachment (LDet 9) was deployed to Savijärvi.

The main forces of the rifle regiment (529th RR) attacked in the Nurmijärvi area, reaching Puurunjärvi by 4 December. The battalion from the rifle regiment that attacked in the Lieksa area reached Viisikkojärvi by 5 December. The group deployed two separate battalions (12th SepBn and 13th SepBn) in the Nurmes area and its field reinforcement battalion (RBn/NKG) in the Lieksa area.

The main forces of Brigade Vuokko were transported by rail to Nurmes and from there by car to the area south of the Rasti crossroads. The brigade attacked the southern flank of the enemy’s mountain division (54th MountD) with two battalions (I/25th IR and II/25th IR) on 8 December. Reinforced with a battalion of Brigade Vuokko (III/25th IR) that had initially been transported to Sotkamo, Group Ilomäki attacked the northern flank of the Soviet division three days later. The offensive’s main goal of defeating the enemy was not achieved, but the attack by the 54th Mountain Division in the Kuhmo area was stopped.

Withdrawal of Soviet forces from the North Karelia Group’s area 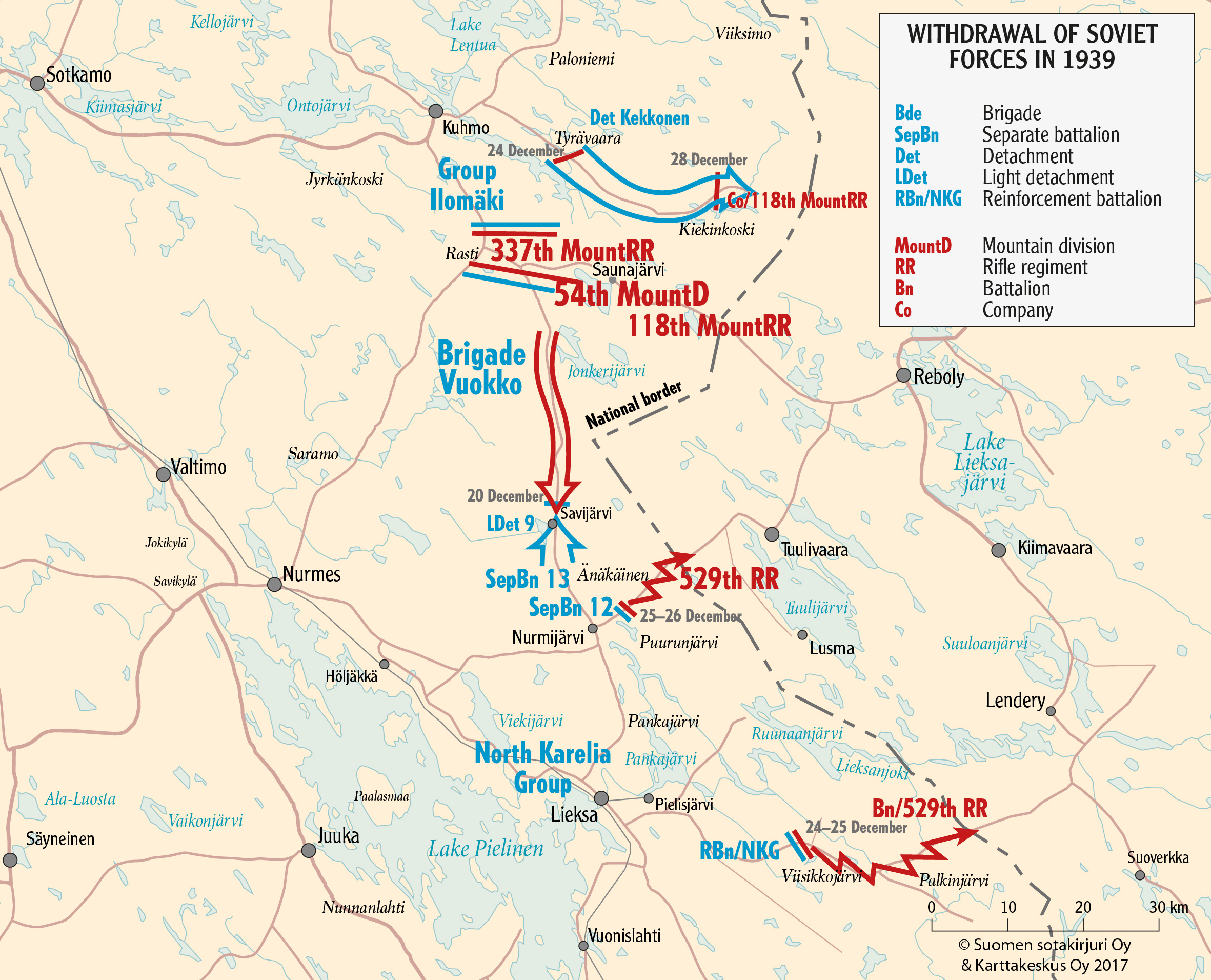 The North Karelia Group prepared to launch an offensive in the Viisikkojärvi area on Christmas Eve. Right before the start of the offensive, reconnaissance patrols reported that the enemy troops had left their positions. The Soviet forces in the Puurunjärvi area began their withdrawal on Christmas Day. The Finns found the enemy’s defensive positions empty the following day. The troops of the North Karelia Group advanced to the national border on both fronts and afterwards took up defensive positions.

In Group Ilomäki’s area, an offensive was launched on 24 December by Detachment Kekkonen, which had been formed in the Tyrävaara area out of approximately two companies. The enemy was forced to withdraw to Kiekinkoski, where the Finns defeated the enemy troops, who had taken up defensive positions, with an offensive that was launched on 28 December.