The Soviet forces caught in pockets, known as mottis in Finnish, as a result of the offensive in January fought back resiliently. The large-scale motti of Kitilä and some of the mottis on the Kitilä–Käsnäselkä road held out until the end of the war. The Soviets formed a new army in the area. The number of divisions in this new army more than doubled by the end of the war.

Reorganisation of Soviet forces in January

On 10 January, the forces deployed in the Kitilä (Kitelya)–Kolatselkä–Salmi area were formed into the Southern Group. The Main Command of the Red Army, i.e. the Stavka, formed it into a new army (15th Army) in February. The commander of the Southern Group, Army Commander 2nd Rank Mikhail P. Kovalyov was appointed its commander. Over the course of January, the army was reinforced with two rifle divisions (11th RD and 60th RD).

The mission of the new army (15th A) was to free the forces that were trapped in mottis (18th RD, 168th RD and 34th TBde). A rifle corps (56th RC) was in charge of the area of the Käsnäselkä (Kyasnyaselkya)–Kitilä road, which was located in the northern part of the new army’s area. Of its forces, one rifle division (60th RD) fought outside of the mottis.

The duties of the Finnish forces

During the offensive battle in January, Hägglund’s corps (IV C) had increased the size of the area that Tiainen’s division (12th D), which was in charge of the Kollaa River–Loimola (Loymola) area, was responsible for. It was extended west along the Käsnäselkä–Kitilä road, reaching the east side of the mottis in Lemetti. In the Kitilä area, a battle group (BaG Tähtinen) was responsible for the front, while one division (13th D) was tasked with destroying the mottis.

Around mid-January, Finnish forces detected a new Soviet division (164th RD) at the Kollaa River. The Soviet forces launched an attack there on 21 January, but it was repelled by the units of Tiainen’s division (12th D). 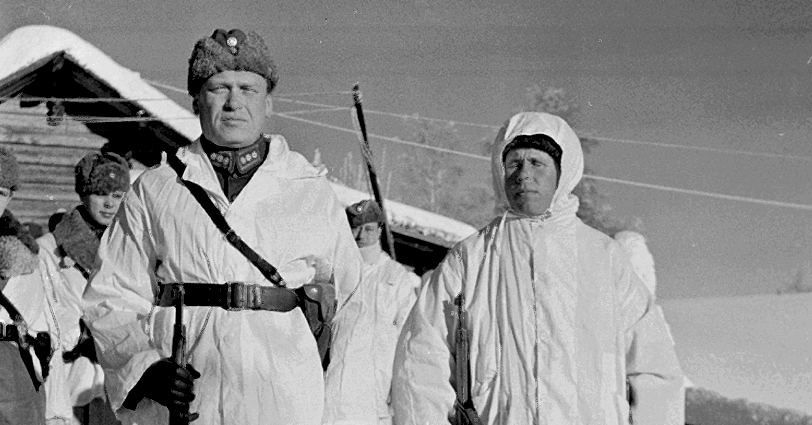 On 17 February 1940, Colonel Svensson presented Simo Häyhä, who had been promoted to Corporal, with a precision rifle donated by a Swedish businessman. According to the headquarters of Svensson’s division (12th D), Häyhä had by then killed 212 enemy soldiers with his rifle. Häyhä’s time at the front ended when he was wounded on 6 March 1940. Corporal Häyhä was promoted to second lieutenant on 21 June 1941. SA-kuva.

More troops for the IV Corps

Between mid-January and the first days of February, the General Headquarters concentrated an infantry regiment (64th IR), the Cavalry Brigade (CaBde) and a division (23rd D) formed from a home reinforcement division, as well as other units, in Ladoga Karelia. However, the division was soon transferred to the Karelian Isthmus. One infantry regiment (69th IR) from the division was left in the Loimola area. It was transferred to the Kollaa River at the end of February. Regiments from the Cavalry Brigade (CaBde) participated in destroying two mottis. At the beginning of March, the brigade was relocated back to the Karelian Isthmus, this time to Vyborg Bay.

More troops for the 15th Army

On 4 February, Hägglund’s corps (IV C) was able to destroy the motti in western Lemetti out of the mottis located between Kitilä and Käsnäselkä. On 28 February, the Soviet 15th Army gave the troops of the 18th Rifle Division and the 34th Tank Brigade, which were caught in a motti in eastern Lemetti, permission to leave their equipment behind and try to make their way to their own lines. Finnish forces destroyed a considerable part of the units that tried to break out of the mottis on 29 February.