Battles on the Karelian Isthmus

In all situation assessments prepared in the interwar period, the Karelian Isthmus was the area most at risk of an invasion along Finland’s eastern border. The road and rail network on the Isthmus would enable the deployment of several divisions in the very first phase of an attack. In the defensive battles in December, the Red Army’s advance was stopped at the Mannerheim Line. In January, the Soviet Union almost tripled its forces on the Isthmus. These forces launched a large-scale offensive in February, forcing the Finnish forces to retreat to the line between Viipuri and the Vuoksi River on the western Karelian Isthmus. On the eastern Karelian Isthmus, the defensive line running along the Vuoksi River and Taipale River held.

The assessments by the Finnish General Staff regarding the number of divisions with which the Red Army would attack the Karelian Isthmus ranged from nine to twelve.

The General Staff assessed that the enemy’s main focus on the Karelian Isthmus would be in the western part of the region, in the Viipuri (Vyborg) area. The shortest route to Helsinki was through Viipuri. The area between Karhula and Lake Muolaanjärvi (Glubokoye) was considered to be the gate to Viipuri. This had also been taken into account in the fortification carried out prior to the Winter War. These permanent fortifications on the Karelian Isthmus included concrete bunkers and machine gun nests.

Fortification of the Isthmus

Fortifications were built on the Isthmus in summer 1939, some of them by volunteers. During the additional refresher training of autumn 1939, the wartime troops on the Karelian Isthmus began building field fortifications at their stations. These field fortifications included trenches, nests and dugouts, which were reinforced with wood as well as rocks in the roofs. 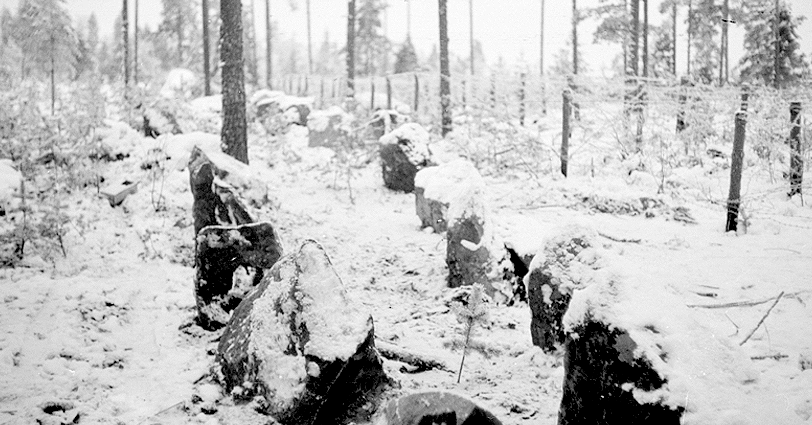 Dragon’s teeth made of rocks in Räisälä (Melnikovo) on the Karelian Isthmus, with a barbed wire fence on the right. Photo taken on 16 December 1939. SA-kuva.

Anti-tank obstacles were built in front of both permanent and field fortifications. On the Isthmus, they were usually built from rocks, but the anti-tank obstacles there also included trenches reinforced with wood, which were common elsewhere. 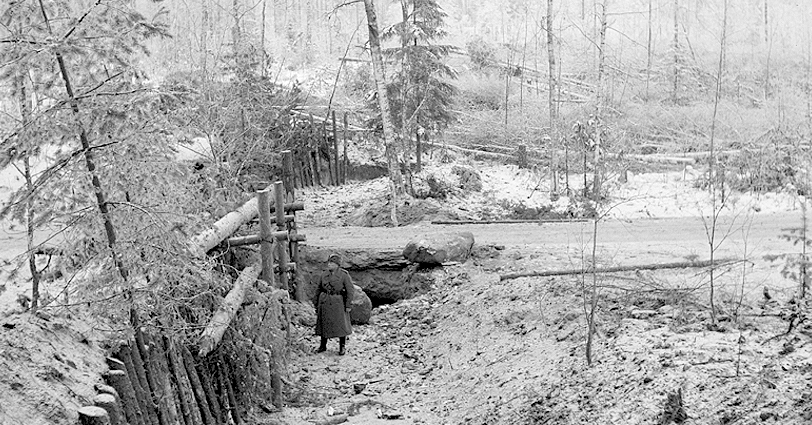 An anti-tank trench and obstacles made of felled trees on the Karelian Isthmus. Photo taken on 18 December 1939. SA-kuva.

Balance of power in December

In December, the Red Army’s 7th Army had two rifle corps (RC), a tank corps (TC) and three tank brigades at its disposal on the Karelian Isthmus. The majority of the army’s approximately ten rifle divisions belonged to rifle corps and the army’s reserve. Its total strength was a little under 250 000 personnel. The assault troops were armed with approximately 2 000 guns and approximately 1 500 tanks in total. The forces were supported by over 1 000 aircraft.

The covering forces of the Finnish Army of the Isthmus and the field army forces were approximately six divisions strong in total. Five of these divisions belonged to the army’s two army corps and one served as the army’s reserve. In addition to its divisions, the army also had covering forces deployed in the area between the national border and the main defensive line.

One division was deployed near the Karelian Isthmus as the commander-in-chief’s reserve. The total strength of the forces on the Isthmus was over 120 000 personnel. The army was equipped with approximately 250 guns in total. Flying Regiment 1 was subordinated to the army at the start of the war. Its liaison squadrons were only capable of reconnaissance flights, and only when it was dark. The only aircraft capable of aerial combat were the fighters in Flying Regiment 2, commanded by the commander of the air force.

Progression of the battles fought on the Isthmus

The defensive battles in December were divided into battles fought in front of the main defensive line, i.e. the Mannerheim Line, and those fought at the line to repel breakthrough attacks by the enemy.

Soviet forces were able to keep the initiative throughout the trench warfare phase. The Red Army also retained the initiative during their large-scale offensive in February and March.

The Army of the Isthmus repelled the breakthrough attacks in December

Commanded by Jaeger Officer, Lieutenant General Hugo Österman, the Army of the Isthmus repulsed an offensive by the enemy’s 7th Army at its main defensive position on the Mannerheim Line in December. The hardest battles on the western Karelian Isthmus were fought in the Summa area, while on the eastern Isthmus the hardest battles took place in the Taipale (Solovyovo) area.

Towards the end of December, the military command of the Soviet Union decided to almost triple its forces on the Isthmus. The troops already deployed in the region were ordered to assume defensive positions. The command hierarchy was also reorganised. The Northwestern Front was established as the supreme command of the troops on the Isthmus. It was commanded by Army Commander 1st Rank Semyon K. Timoshenko. Under him were the 7th Army, commanded by Meretskov in the western Karelian Isthmus, and the newly established 13th Army in the eastern Karelian Isthmus. The latter was commanded by Corps Commander Vladimir D. Grendal.

The Red Army troops already deployed on the Isthmus, as well as those arriving there, began their training in breaking through fortified positions. Offensive operations were maintained with powerful artillery fire. It put a strain on the Finnish troops, as they had to stay ready to repel enemy attacks during the day while spending their nights repairing the defensive positions that had been damaged by the enemy’s artillery fire.

Balance of power in February 1940

The Northwestern Front formed by the Red Army for the large-scale offensive on the Isthmus in February initially comprised 23 divisions. Additionally, the Soviet military command had a reserve of approximately nine divisions on the Karelian Isthmus or in its immediate vicinity.

Two divisions (21st D and 23rd D) were transferred to the Finnish field army from the Home Troops in January. The General Headquarters concentrated one of the divisions on the Karelian Isthmus and the other in the area north of Lake Ladoga. The latter was relocated to the eastern part of the Isthmus in February, after the start of the large-scale offensive. The number of divisions at the disposal of the Army of the Isthmus increased to nine in February. The number of command echelons within the army corps was increased from two to three in February. Furthermore, two formation-level groups were established between Viipuri and Hamina: the Coastal Group and the Hamina Group.

The commander-in-chief decided to abandon the Mannerheim Line on the western Karelian Isthmus on 15 February. The II Corps, commanded by Jaeger Officer, Lieutenant General Harald Öhquist, was ordered to pull back to the Interim Line south of Viipuri, where fighting continued for a week and a half.

Finnish forces withdrew from the Interim Line on 27 February

The troops of Öhquist’s army corps began to withdraw from the Interim Line as ordered on the evening of 27 February. The next breakthrough attack on the Interim Line by the Northwestern Front started the following morning. The fighting on the western Karelian Isthmus moved to Vyborg Bay and the rear defensive position on the Viipuri–Tali (Paltsevo)–Vuoksi (Vuoksa) line.

In Vyborg Bay, Red Army troops launched an attack across the frozen bay and blocked the road between Hamina and Viipuri, west of Säkkijärvi (Kondratjewo). At the end of the war, Finnish

forces were fighting to constrain the bridgehead seized by the enemy forces on the northern shore of Vyborg Bay. Elsewhere, Soviet forces had advanced near the centre of Viipuri as well as to the area between the city, the Portinhoikka intersection and the Vuoksi River.

On the eastern Karelian Isthmus, battles were fought in Taipale and Vuosalmi

Soviet forces had also achieved a partial breakthrough in the Taipale area, where the Finns had lost some of the trenches at the front. The commander of the III Corps was on the verge of ordering his troops to withdraw to the Interim Line. However, the troops of the III Corps were still holding their positions at the Vuoksi–Lake Suvanto (Sukhodolskoye)–Taipale line when the truce came into effect at 11am on 13 March.