Finland’s battle for its existence during the Winter War ended in a bitter peace. Although the world was publicly sympathetic to Finland, it still fought alone and was left more isolated than ever after the signing of the peace treaty. Despite the peace treaty, the Soviet Union continued to behave in a threatening manner. The information available at the time indicated that the Soviet Union would attack again, given a suitable opportunity.

‘You did not wish for war; you loved peace, work and progress, but you were forced into a battle in which you have performed great deeds, deeds that will shine in the pages of history for centuries to come.’

The fourth paragraph reads as follows:

The final paragraph of the order of the day has been in part considered to be puzzling. What is meant by the debt paid to the West? The paragraph in question reads as follows:

‘We are proudly aware of the historic duty that we shall continue to fulfil; that of safeguarding Western civilisation, which has been our heritage for centuries, but we also know that we have paid to the very last penny the debt that we have owed for it to the West.’

Less attention has been given to the obvious factual error included in the order. According to the order of the day: ‘More than 15,000 of you who left for the battlefield shall never again see their homes, … and now that two hundred thousand of our enemies sleep in the snow and stare at our starry sky with broken eyes, …’ According to statistics compiled after the Winter War, almost 20,000 were killed in the fighting, not including those who were declared missing or died of their wounds later. The Red Army’s losses at the Finnish front, including all who were killed or declared missing, were apparently approximately 128,000 people.

Was Stalin afraid of being pulled into a war against the Western powers?

The Winter War ended on 13 March 1940. The peace treaty that was signed the previous night in Moscow was harsh for Finland. Those in the West widely talked about Finland’s surrender. In April 1940, Stalin already regretted halting the invasion and signing the peace treaty. The apparent key reason for the invasion being interrupted was Stalin’s fear of being pulled into a war against the Western powers.

The population of the ceded territories was evacuated to Finland

According to the peace treaty, Finland had to cede to the Soviet Union areas of Petsamo, Salla and Kuusamo, the majority of the outer islands in the Gulf of Finland as well as the Karelian Isthmus and Ladoga Karelia in their entirety. The last two regions housed three cities: Viipuri (Vyborg), Käkisalmi (Priozersk) and Sortavala. Viipuri was the second largest city in Finland.

The population of the ceded areas was relocated to Finland practically in its entirety. The evacuees totalled approximately 420,000 people, i.e. almost 12% of the population of Finland at the time.

Finland also had to lease the Hanko Peninsula to the Soviet Union and evacuate its residents. 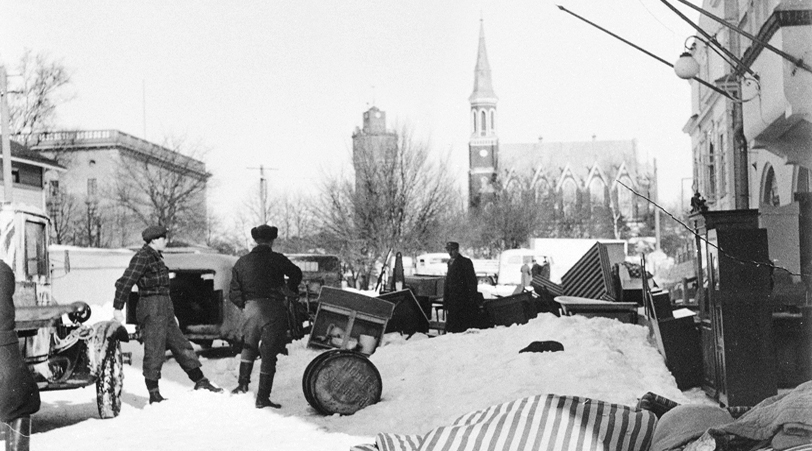 The population evacuated before, during and after the war, as well as the destruction caused by wartime air raids, increased the cramped nature of the civilian population’s living conditions. Losing the agricultural production in the ceded areas was visible in the provision of food for the population.

The Soviet Union returned the Petsamo area to Finland 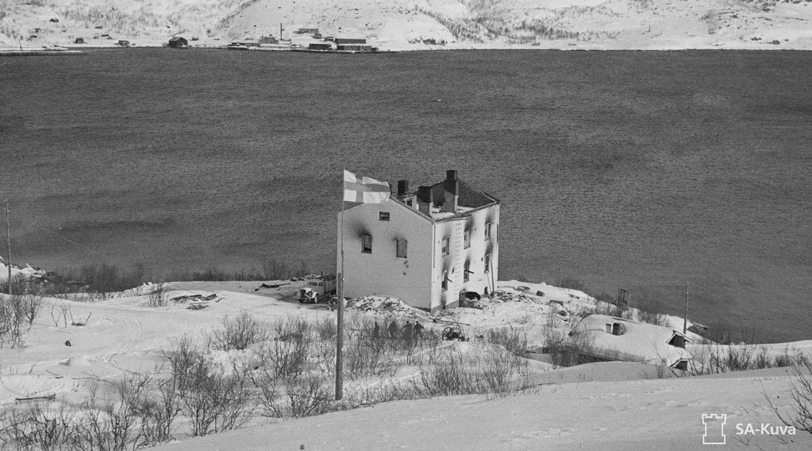 In accordance with the peace treaty, the Soviet Union returned to Finland the area of Petsamo, which it had conquered. Captain Antti Pennanen led the cession of the area. The Red Army forces left the Petsamo area on 9 April 1940.

The returning reservists went back to work

The evacuees from the ceded areas and the demobilised reservists once again changed the organisation of labour. The idea was to dismiss the women who had taken over the male-dominated jobs for the duration of the war and offer work to the returning soldiers.

The Winter War resulted in many casualties 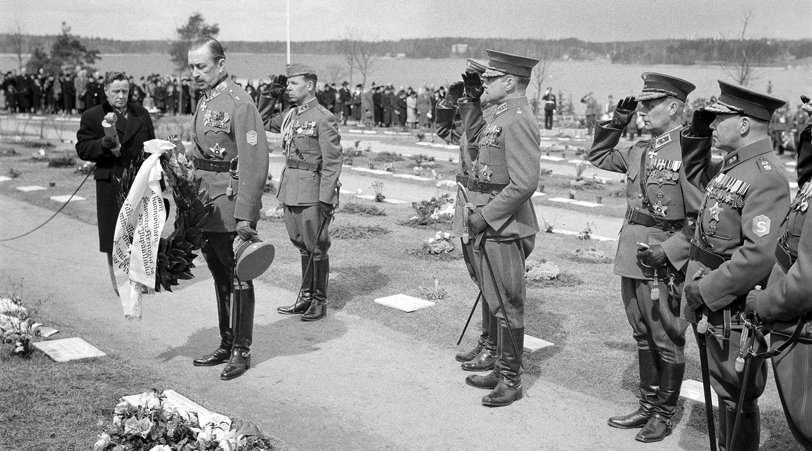 Field Marshal Mannerheim, the commander-in-chief, visiting the war graves at Hietaniemi Cemetery on the first Memorial Day on 19 May 1940. The new Memorial Day replaced the annual celebrations and military parades that had been held on 16 May in honour of the end date of the Finnish Civil War. SA-kuva.

According to the reports made by the Defence Forces and the Ministry of Defence after the war, the number of casualties from the Winter War was 67,000 people. Over 24,000 Finnish soldiers were killed or missing in action. Additionally, approximately 1,000 people were killed at the home front. In the Finnish Merchant Marine, 65 sailors lost their lives. Of the approximately 43,000 wounded, more than 16,000 were severely wounded.

The total number of people killed included those who had died of their wounds, been declared missing or failed to return after becoming prisoners of war. By the end of May 1940, approximately 1,500 of the severely wounded had died of their wounds. The approximately 3,000 soldiers left behind in the field were declared missing. Some of them had become prisoners of war. After the war, more than 800 people returned from prisoner-of-war camps.

Finland was more isolated than ever after the war

After the Winter War, Finland was more isolated than ever. Sweden stood by the stance that it had adopted during the Winter War: it would not get involved in a conflict between Finland and the Soviet Union. Germany invaded Denmark and Norway in April 1940, followed by attacks on the Netherlands, Belgium and France in May. The Allies no longer had the opportunity to influence the situation in the Nordic countries with military force. Germany and the Soviet Union ruled the Baltic Sea. The United Kingdom and Germany monitored the maritime traffic to Petsamo. The Soviet Union was capable of blocking traffic with its coastal artillery if it so wished, having gained control of the entire Kalastajasaarento (Rybachy) Peninsula and Srednisaarento (Sredny) Peninsula (also Pummanki in Finnish) in the Moscow Peace Treaty on 13 March 1940.

The Allies lost their opportunities to influence the Nordic countries

The Western Allies made an in-principle decision at the beginning of February 1940 on providing military assistance to Finland, but the actual goal of the planned operation was to gain control of the Kiruna ore mines in Northern Sweden. The Allies wanted to stop Sweden’s ore shipments to Germany. Germany had replaced the Soviet Union as the main enemy of the Western powers.

In terms of military tactics, the Winter War demonstrated that the Finns were very capable of fighting the Red Army’s forces in the area between Lake Ladoga and the Arctic Ocean. The most important victories of the Winter War were achieved in this area, specifically in Suomussalmi, on the Raate road and in Tolvajärvi(Tolvoyarvi). The motti battles in the areas of Kitilä (Kitelya), Lemetti and Kuhmo also contributed to the image of the successfulness of Finnish tactics, despite the lack of victories.

No particular Finnish tactic was as easily discernible in the battles on the Karelian Isthmus, unless the resilience of the Finnish forces and their ability to conduct quick counterattacks with small numbers was considered as such. The body of generals apparently held differing opinions of the significance of the permanent fortifications at the Mannerheim Line on the Karelian Isthmus. However, in the aftermath of the Winter War, the commander-in-chief, Field Marshal Mannerheim, decided upon the construction of strong permanent fortifications across the length of the new border in order to protect it.

Finland prepared for a new attack by the Soviet Union

The development of warfare skills and tactics was no longer a priority after the Winter War. Following the war, the reorganisation of the army also led to the reorganisation of the entire peacetime system. This major workload was considered to require all available active officers to carry out. They were also needed as trainers for the grown peacetime army. Some of the officers who had returned to civilian life before the Winter War were called back to service.